This is a diorama of Evil Ryu (殺意リュウ) performing his Ultra move: Metsu Hadouken. This dynamic detailed diorama shows the effect of literally shredding the roof top due to the vortex of the fireball. It is the first of a two part diorama that connects to an upcoming diorama of Oni Akuma (狂オシキ鬼).

All prices are in USD.

You must register to use the waitlist feature. Please login or create an account
Category: Street Fighter 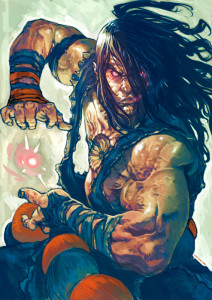 Note: Final product/prints may vary as we keep making improvements and changes during production