Kinetiquettes is proud to bring to the collectibles world one of the most dynamic sculpts ever produced. Having being approved by Daisuke Ishiwatari himself, we’re happy to finally deliver to all the Guilty Gear fans our first statue from this series: Dizzy!

Posing in her Gamma Ray attack the statue shows her sentient wings delivering destruction, as she tries in vain to hold back Necro and Undine’s devastating power. This is a tribute to this beloved fighting game franchise and we’re honored to bring such an awesome character in statue form! 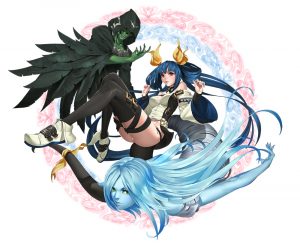 All prices are in USD

Background: Dizzy is the half-gear, half-human playable character from the fighting game series Guilty Gear. Her gear cells allow her to mature at a rapid rate, as well as absorb and process information far better than a human. Despite appearances, she is in fact only 8 years old. Possessing an honest heart and a love of nature and humanity, she strongly opposes conflict, while still understanding that destruction is a part of the cycle of life. Her sentient wings Necro and Undine protect her in battle, whether she wishes them to or not.

Gears incite fear and distrust from humans. As such, Dizzy’s early life was fraught with hate and threats to her life due to a massive bounty placed on her. She was finally subdued by Sol Badguy, who chose not to kill her. In the aftermath of their fight, Dizzy went on to live with her new friends Johnny and May of the Jellyfish Pirates. This freedom allowed her to meet and fall in love with Ky Kiske, a director of the International Police Force. Together they bore a child named Sin, who shares Dizzy’s gear nature.